The Bouillante 3 project focuses on a promising section of the geothermal reservoir on the northern shore of Bouillante Bay. Although the prospects are solid and based on the in-depth knowledge of the reservoir acquired through Bouilllante Units 1 and 2, significant research is still required.

The planned production capacity of a potential Bouillante Unit 3 would be as high as 20 MW to 30 MW, which would be sufficient to cover Guadeloupe’s growing electricity needs.

The Roseau Valley site, located in the southern half of Dominica Island, has strong geothermal potential. 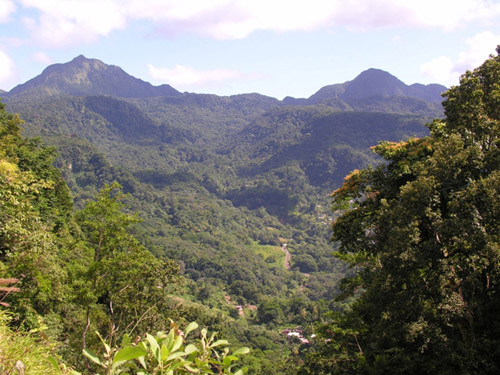 Photograph of the village of Wotten Waven (right) and the upper section of the White River Valley (background).

Recent exploratory drilling funded by the French Development Agency (AFD) on this site was the first step in Dominica’s geothermal energy development and confirmed a significant resource, large enough to ensure energy self-sufficiency for Dominica and to potentially export surplus electricity to Guadeloupe and Martinique through undersea cables.

Current estimates of power distribution are: 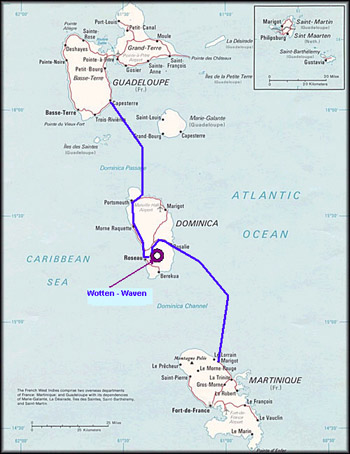 Electricity connection project between the islands of Dominica and Guadeloupe and Martinique by undersea cables, with geothermal electricity produced in Dominica
Source: AFD

“Géothermie Caraïbe” (Caribbean Geothermal Energy) is an ambitious project, funded by the Interreg program and supported by the regional government of Guadeloupe, and which includes the geothermal project in Dominica. Its initial phase confirmed the existence of geothermal potential and assessed the feasibility of interconnecting Dominica with the islands of Guadeloupe and Martinique.

Participants in this large-scale joint project, whose second phase recently launched, include the French Environment and Energy Management Agency (ADEME, the regional government of Martinique, the government of Dominica, AFD, Caisse des Dépôts et Consignations (a French public sector financial institution), BRGM and Electricité de Strasbourg. The project created the necessary conditions for a development program for geothermal electricity production in the Caribbean. It used concrete cases (Bouillante and Dominica) to define methods that can be replicated in other Caribbean states. The emphasis is on environmental excellence and the need to develop future geothermal projects that are fully integrated into their environment and accepted by local residents.

The original hope of delivering the project by 2023 has been compromised, however, due to the delay in the Dominican project in Dominica, which was exacerbated by the September 2017 hurricane season and due to the yet-to-be-created electricity interconnection needed to affect the energy mix in Guadeloupe.

The PPE does not expect to meet its initial PRERUE goal of an additional 15 MW delivered to Guadeloupe by 2020.

Guadeloupe would like to continue the work planned in the Interreg IIb and IV “Géothermie Caraïbes” project by creating a Center of Excellence.

The Center of Excellence will operate as part of regional knowledge initiatives led by the University of the French West Indies, the Caribbean Centre for Renewable Energy and Energy Efficiency (CCREEE) and the Organisation of Eastern Caribbean States (OECS). It will also draw on projects under development in the region (e.g. Dominica, St. Kitts & Nevis, Montserrat, St. Lucia, St. Vincent and the Grenadines) as operational and technical training platforms.

We use cookies to ensure the best experience on our website. By continuing to use this site, you agree to the use of cookies.Ok