The Energy Transition for Green Growth Act (Loi relative à la Transition Énergétique pour la Croissance Verte, LTECV), which was adopted by the French legislature on August 18, 2015, stated in Article 203 that Guadeloupe would have its own Multi-Year Energy Plan (Programmation Pluriannuelle de l’Énergie, PPE). This plan was jointly drafted by the national and regional governments following broad dialogue in Guadeloupe that began in 2008 with the drafting of PRERURE and through 2012 with the drafting of SRCAE. The PPE is now the benchmark in terms of energy planning.

French Decree #2017-570 approving Guadeloupe’s 2016–2023 Multi–Year Energy Program (PPE) was passed on Wednesday, April 19, 2017 and published in the French government gazette Journal Officiel #94 of April 21, 2017. This piece of legislation is currently being revised to assess and (if necessary) correct the parameters for the stated objectives.

Guadeloupe’s PPE details the major directions of regional energy policy, ranks the relative importance of policy areas, identifies risks and associated difficulties, and prioritizes actions for the government in order to achieve the goals set out by the LTECV.

The objectives described in the PPE are more ambitious than those in PRERURE.

With its PPE, the regional government hopes to create solutions that are equal to the energy challenges facing Guadeloupe, and to meet objectives set out in the LTECV relating to final energy consumption levels:

The PPE strengthens measures that: 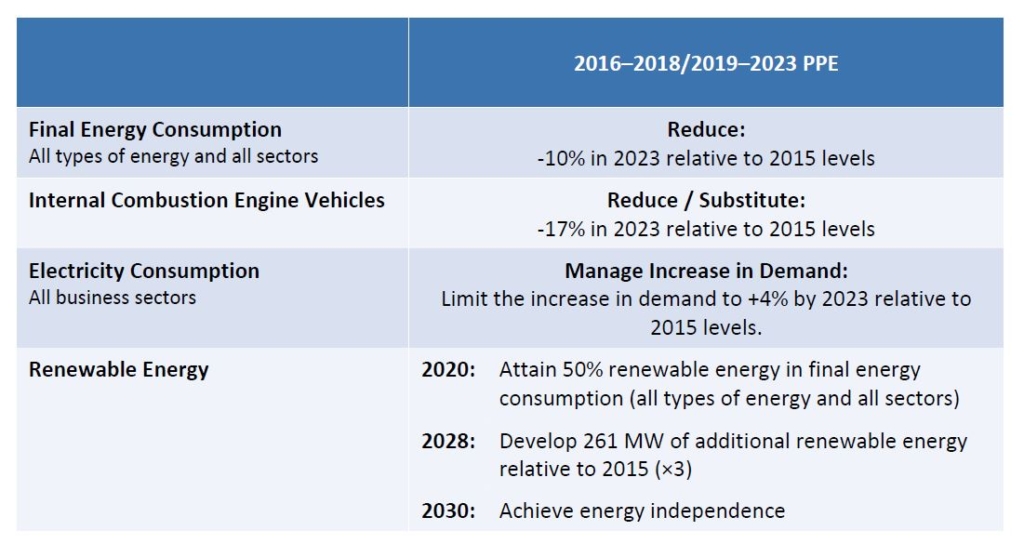 Guadeloupe PPE Objectives by the Numbers

We use cookies to ensure the best experience on our website. By continuing to use this site, you agree to the use of cookies.Ok